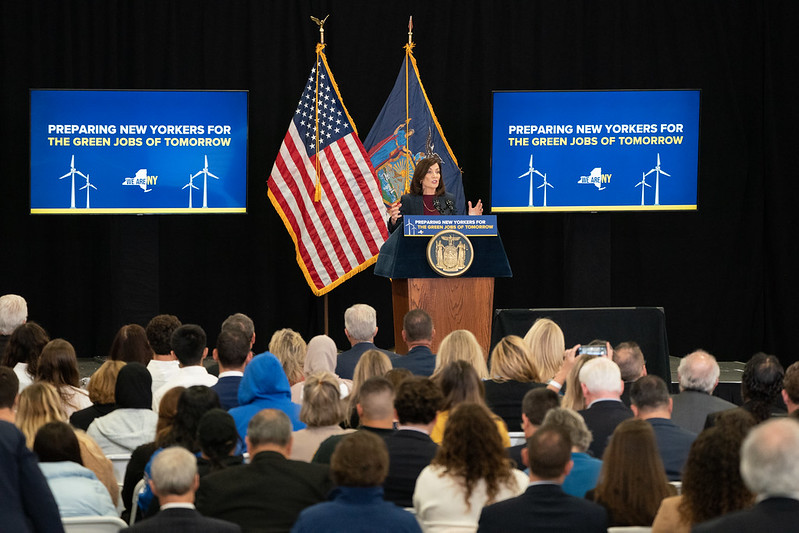 Long Island, NY — The New York State Energy Research and Development (NYSERDA) is hosting a series of informational open houses throughout the month to provide the latest updates on the state's plan for offshore wind development. Tuesday’s Brookhaven meeting included details on the two proposed projects from Empire Wind and Sunrise Wind.

These two large-scale offshore wind projects will generate enough power to supply 1 million homes with electricity. By 2035, NYSERDA hopes to generate enough clean energy from the turbines to power 6 million homes. The projects are necessary for the state to accomplish the goals set by it’s recent climate legislation, the Climate Leadership and Community Protection Act (CLCPA), designed to mitigate the impacts of the climate crisis.

By requiring developers to work with labor and community groups, NYSERDA can ensure local, good-paying, family wage jobs through manufacturing opportunities from offshore wind. Coupled with further investments in rooftop solar, energy efficiency, and grid upgrades like battery storage, New York can become a leader in addressing the climate crisis and help the state meet its legal requirement of reaching a 100 percent carbon free electricity by 2040.

New York State commits to enough offshore wind power for 400,000 homes over the next two years and invests $15 million in workforce development and infrastructure.

The Governor called for an offshore wind power procurement of at least 800 megawatts by 2019 - enough clean energy from the wind off the coast of Long Island and New York City to power 400,000 homes.  This will be the first step in the process to meet New York’s goal set last year to develop 2,400 megawatts of offshore wind power by 2030.

A key element of the Governor’s proposal is a $15 million investment in workforce training and infrastructure planning to advance opportunities for New Yorkers to participate in this new industry. Today’s announcements will help New York position itself to meet the supply chain and construction needs for building and operating offshore wind turbines, creating a range of new economic development opportunities across the state.

These steps forward are critical for New York to remain at the forefront as offshore wind power finally takes off in the Northeast. With others in the region also moving state policy commitments forward – including Massachusetts, Connecticut, New Jersey, and Maryland – now is the time for New York to act to maximize the engagement of New York’s workforce and port facilities in the launch of the U.S. offshore wind industry.

Leaders from organized labor and environmental organizations, along with business groups and a bipartisan coalition of elected officials, have united to celebrate the Governor’s announcement today and support the State’s efforts to make offshore wind a key component of the “50 by 30” strategy to increase renewable energy, reduce reliance on fossil fuels, and spur economic development opportunities for New Yorkers.

The broad, diverse coalition came together at a news conference at the Long Island Association offices in Melville in advance of a public meeting hosted by the New York State Energy Research and Development Authority (NYSERDA).

NYSERDA’s public meetings are part of its process to create an Offshore Wind Master Plan to advance projects that could power more than 1.25 million homes on Long Island and New York City. NYSERDA's Offshore Wind Master Plan is part of Governor Cuomo’s goal to have 50% of New York’s power generated by renewable energy sources by 2030. Offshore wind power can help meet that goal with clean, local, emission-free and cost-effective energy.

NYSERDA’s Offshore Wind Master Plan should create a roadmap for how our state can take advantage of the strong winds far off the coast of Long Island and at the same time protect our coastal and marine wildlife and preserve existing offshore industries and activities.

Local, state and national organizations hailed this project as an essential first step towards a bold, long-term, large scale offshore wind program for New York. Building off of LIPA’s historic vote today, groups also urged the LIPA Board of Directors to commit to an additional investment of at least 210 more megawatts of offshore wind in the upcoming Island Wide procurement. The decision, which is expected to happen in March of 2017, will help ensure Long Island becomes a regional hub for a new, clean energy industry, spurring thousands of jobs and economic development opportunities throughout the state....

“Today’s announcement to postpone LIPA’s vote for an offshore wind farm over 30 miles from Montauk is deeply disappointing. Last week, Governor Cuomo issued a statement in support of the project, saying: ‘I strongly encourage the Trustees to once again demonstrate New York's leadership on climate change and help achieve the state's ambitious goal of supplying 50 percent of our electricity from renewable energy by 2030.’ Today, we are calling on Governor Cuomo to follow through on this commitment to support offshore wind and work with LIPA to expeditiously reschedule this historic vote.

“We couldn't agree with the Governor more when he says that this project is ‘another opportunity for this state to lead the nation in creating a stronger, more resilient energy system and protecting the environment for future generations.’ When opportunity knocks, we must open the door. We need Governor Cuomo to ensure this vote happens quickly so that offshore wind power becomes a reality for New York.

“A timely commitment to offshore wind power for the South Fork is not only important in achieving Governor Cuomo’s laudable goal of 50 percent renewable energy by 2030, but it’s also critical for ensuring the reliable, cost-effective and clean operation of the electric system on the South Fork. In the absence of this wind farm, LIPA will be forced to add more fossil-fueled power plants that will increase costs for all ratepayers.”

Uniondale, N.Y.— The Long Island Power Authority (LIPA) announced today it is recommending development of New York’s first ever offshore wind farm. LIPA’s board will formally vote on the proposed contract at a meeting next Wednesday.

Slated to be the the largest in the nation, this 90-megawatt, 15-turbine offshore wind farm would be located far off the coast of Montauk, at the eastern end of Long Island. Deepwater Wind, one of the country’s leading offshore wind companies, would spearhead the project, which is estimated to be three times larger than the Block Island wind farm project slated to begin operation off the shores of Rhode Island later this year.

For over five years, local, state and national organizations along with communities up and down Long Island in partnership with labor, municipal leaders and businesses have been actively engaged in pushing LIPA to embrace offshore wind power. Today, they cheered this announcement as the necessary first step in a bold long-term large scale offshore wind program for New York. The project will produce enough energy to power about 50,000 Long Island homes by 2022.

The Long Island Power Authority is expected to formally approve the project at the July 20, 2016 board meeting. LIPA and Deepwater Wind are expected to finalize all financial plans for the project by 2017.