Solar power is big news in the Town of East Hampton! The sign-up deadline of the town’s Solarize campaign, which makes going solar easier and more affordable for residents and businesses, ends on October 31, 2018. 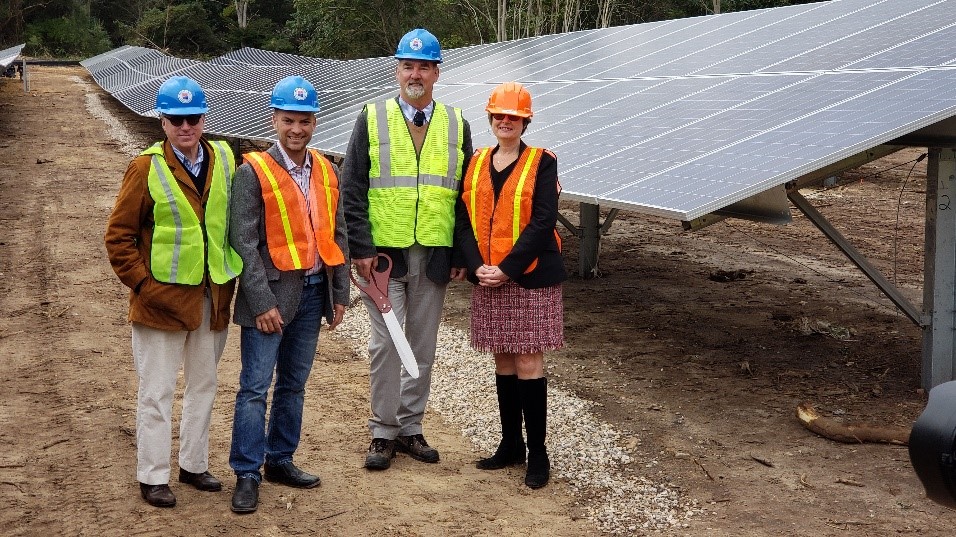 Construction is almost complete on the South Fork’s first utility scale solar farm at a former brush dump on Accabonac Road in Springs.  The solar farm is expected to be online in December 2018 with 1.1 MW (DC) of capacity, feeding electricity directly into the existing electric grid.  Town Supervisor Peter Van Scoyoc and Board members held a ribbon cutting ceremony on October 22nd to celebrate the completion of the first rows of panels.  This solar farm is an important step towards the Town’s goal of meeting 100% of annual, community wide electricity need with renewable sources.

This community wide goal is a community wide effort.  In May 2018 the Town launched a renewable energy initiative called Energize East Hampton, which connects residents and local businesses to programs that help them reduce their energy consumption, and as a result, lower their energy bills.  Energize East Hampton includes a Solarize campaign.  The goal of this campaign, supported by the State’s NY-Sun initiative, is to increase the number of grid connected rooftop solar PV systems in East Hampton.  Residents and businesses can install rooftop solar PV systems at a discounted price offered exclusively through the campaign.  Earlier this year the Town sent out an RFP and through a competitive selection process, chose local company GreenLogic Energy as the designated solar installer for Solarize East Hampton.  GreenLogic helps residents and business owners through every step of the process, beginning with a free consultation, site assessment and estimate.

Residents and business owners that are interested in solar installation are urged to sign up through the Campaign by the October 31st program deadline to receive their free solar evaluation and discounted pricing at EnergizeEH.org/solar